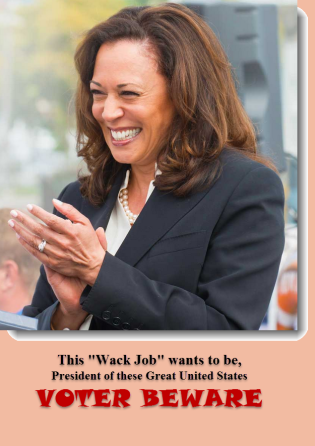 I do solemnly swear (or affirm) that I will support and defend the Constitution of the United States against all enemies, foreign and domestic; that I will bear true faith and allegiance to the same; that I take this obligation freely, without any mental reservation or purpose of evasion; and that I will well and faithfully discharge the duties of the office on which I am about to enter: So help me God.

Does not this “Wack Job” not understand the “OATH that she took to assume office?  It was an “OATH” before God and “We The People” if she doesn’t like it QUIT!

“Nobama” made the statement that the one thing stopping him from becoming the greatest President ever was the U. S. Constitution, this is what we have in store with this dimocrat “Whack Job”

I received the following letter in the form of an Emil from the “esteemed Senator Harris of California.  I asked a question about the Veterans Administration.

Apparently she thought that it gave her permission to “Spam” my email with  her hatred of the U.S. Constitution and “We The People”

Thank you for voicing your concerns about gun violence and the need to take action to address it.

The incidence of gun violence in our country is staggering. Every day, over 340 people in America fall victim to gun violence. And, too often, Americans are killed or injured in mass shootings committed in our schools, churches, and neighborhoods. From Las Vegas to Sandy Hook to Stoneman Douglas High School, our nation continues to witness senseless tragedies from gun violence.

We do not need more tragedies to spur Congress to action. What we need is common sense gun reform. It has been over a year since the Las Vegas shooting, yet Congress still has not banned bump stocks. The time for action to prevent gun violence is now.

As your Senator, I have fought to enact common sense gun safety laws. I have co-sponsored legislation that would fund research on firearm safety and gun violence prevention. I have strongly supported the Automatic Gunfire Prevention Act, which would ban bump stocks. I have cosponsored the Assault Weapons Ban to protect our communities from weapons of war. I have called for universal background checks to keep guns out of the hands of violent and dangerous people.

I will not stop fighting for common sense gun safety laws, and I appreciate your support in that fight. If you have additional questions or concerns, please do not hesitate to contact my Washington, D.C. office at (202) 224-3553.